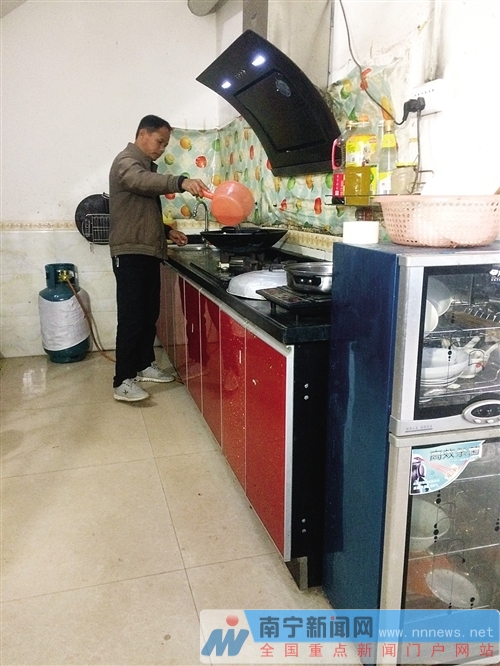 Villagers' kitchen is clean and tidy after upgrading

"Changing the kitchen and changing the toilet" work is an important part of the "basic convenience" work in the "Beautiful Nanning · Livable Village" activity. Since 2017, Nanning City has taken various measures to promote the smooth progress of the work in an orderly manner. The changes in small kitchens and toilets have brought about major changes in the "beautiful Nanning · Livable Village" activity. As of now, 105,541 rural toilet renovations have been completed in the city, with a completion rate of 102.2%, and 104,126 rural kitchen renovations have been completed, with a completion rate of 100.6%. The annual renovation tasks have been overdone ahead of schedule.

"The kitchen reconstruction subsidy is 700 yuan, and the toilet reconstruction subsidy is 1200 yuan. My family only used 450 yuan to put on a clean and hygienic kitchen." Recently, the reporter came to the home of Huang Shanyuan, a villager in Meisongpo, Wukang Village, Tanluo Town, Xixiang Tang District. . The kitchen stoves in his house are covered with tiles, and the gas stove is used. The kitchen utensils are neatly stored in the cabinets, and the entire kitchen is neat and clean. Similarly, the bathroom of his house has been upgraded and renewed.

Like the Huang Shanyuan family, in 2017, 30 villagers in Meisongpo responded to “changing kitchens and changing toilets”, and their living environment became more comfortable than before. According to Pang Xiaomin, deputy director of the village of Xixiangtang District, since 2017, Xixiangtang District has been fully carrying out the “Livable Village” basic convenience demonstration county activities to create a “kitchen and toilet” demonstration site. The city's unified procurement of "integrated" septic tanks, unified construction, implementation of funding award mechanism, adapt to local conditions, and transform as needed.

This year's rural “remodeling kitchens and remodeling toilets” work involves 7,200 households in Jinling Town, Tanluo Town, Shuangding Town, and Shibu Street, and all of them have been completed.

Like Meisongpo villagers, more than 60 villagers in Wuwangtun, a handsome village in Liangjiang Town, Wuming District, are also beneficiaries of "changing kitchens and changing toilets."

Villager Li Xiuqun said that when there were no toilets in the home before, the village entrance was used to use public toilets. Under the guidance of government staff, his family's toilets were harmlessly remodeled. The toilets, which were originally built dozens of meters away from the house, were converted to the home, making life easier. Nowadays, with the deepening of the work of “changing kitchens and toilets”, 90% of the sanitary toilets have been completed in Xiwangtun.

"Through 'changing kitchens and changing toilets', living conditions in rural areas and the appearance of villages and villages are getting better and better, and villagers' environmental awareness has also been significantly improved." Said Shi Yan, deputy mayor of Wuming District, since 2017. In accordance with the principle of "voluntary, basic subsidy, and economic feasibility", Ming District vigorously promotes and promotes the "integrated" septic tank new technology to reduce the cost of "kitchens and toilets" in rural areas and improve the effect of renovation.

More than 100,000 villagers in the city benefit

"Changing the kitchen and changing the toilet" work is an important part of the "basic convenience" work in the "Beautiful Nanning · Livable Village" activity. Since 2017, Nanning has taken rural “kitchen and toilet modification” work as a major public opinion project, taking multiple measures simultaneously and orderly to promote the smooth development of “kitchen and toilet modification” work, laying a good foundation for the construction of livable villages. basis. As of now, 105,541 rural toilet renovations have been completed in the city, with a completion rate of 102.2%, and 104,126 rural kitchen renovations have been completed, with a completion rate of 100.6%. The annual renovation tasks have been overdone ahead of schedule.

In the next step, Nanning will be guided by the "Toilet Revolution" and highlight the work of "changing kitchens and toilets" in rural areas. Properly increase the content of rural public toilet renovation, continue to highlight the goal of harmless transformation, achieve no dead ends in governance, keep the renovation work relaxed, and strive to comprehensively eliminate the phenomenon of farmers without toilets and the use of non-hygienic toilets, and ensure that rural sanitation is achieved on schedule The penetration rate of toilets has reached the work target of more than 90%. (Reporter Lu Zeng'an)